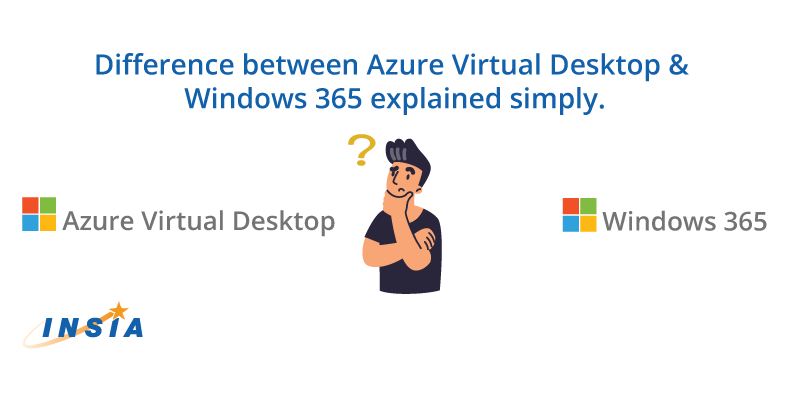 What is the difference between Microsoft’s Azure Virtual Desktop (AVD) & Windows 365?

But the Covid 19 pandemic has made teleworking more widespread, dramatically accelerating the adoption of remote working environments. As far as Microsoft is concerned, this has notably resulted into a massive influx of new WVD users.

But it quickly turned out that many of these new users did not have the resources, the know-how, or even the need for an infrastructure as demanding as Windows Virtual Desktop, which requires extensive customization. They just wanted quick and easy access to a Windows 10 desktop, along with their regular Windows apps. This is why Microsoft inaugurated Windows 365 in August 2021by launching its “Cloud PC” offer, that is to say a complete OS running on the cloud, and not just a series of applications as Office 365.

But in the meantime, what happened to WVD? Rebranded as AVD (Azure Virtual Desktop), it has been enriched compared to WVD with some additional features, in particular multi-session on a VM or support for Linux OS.

It is pretty clear that Windows 365 is aimed more at companies with a small IT department and clearly defined needs, thanks to a turnkey service that eliminates the need for in-house expert resources. This simplicity and transparency, in line with Office 365, also suggests that Windows 365 will be opened to the general public in the near future.

The AVD solution seems to be designed for structures with more complex needs, which requires a detailed analysis of the resources to be committed and above all a lot of scalability. A certain level of expertise is required during deployment and day-to-day management, although automation solutions such as Cycloud exist.

We could therefore synthetize by saying that Windows 365 is more designed for very small and medium-sized businesses, while Azure Virtual Desktop is geared more towards large companies. Therefore, the decision will rely on choosing between these two trade-offs: flexibility / complexity for Azure Virtual Desktop, and simplicity / rigidity for Windows 365.

What are the KPI for a multi-cloud or hybrid environment?

Is Metaverse the future of Workplace?
Scroll to top
We use cookies to ensure you the best experience on our website. If you continue to use it, we will consider that you accept the use of cookies.Ok